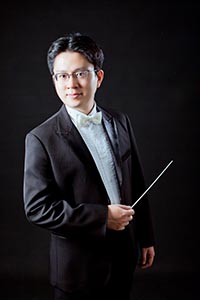 Dr. Lee is a participant conductor for the famed Cabrillo Music Festival in 2015 and is the recipient of the Bruno Walter Conducting Scholarship.  He is also a participant of the prestigious Tokyo International Conducting Competition in 2012 and a semi-finalist of the Bruno Walter National Conductor Preview held by the League of American Orchestras in 2013.