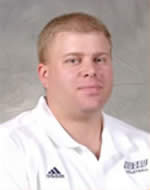 Bo Pagliasotti is a full time instructor for Kinesiology. He is originally from Denver, CO and moved to Weatherford, OK from Texas to become the first Head Coach of SWOSU Women’s Volleyball Program in 2005. Bo has been coaching and teaching in the collegiate ranks since 1997. Pagliasotti accepted the position at SWOSU and moved to Weatherford in January of 2005 where he has been an adjunct professor for the SWOSU Parks and Recreation Dept in the Sports Management Program and the Kinesiology Dept. After becoming the Sports Management Program Director in 2009, he has continued to develop many of the classes in order to make it a stronger program. He successfully added an official Sports Management Minor in 2012, and has continued to help grow the program in its transfer of both the Master’s Program and Minor program from the PRM Department to the Kinesiology Department. Pagliasotti also volunteers as the advisor to the Student Athletes Advisory Committee as well as an assistant coach for the SWOSU Women’s Volleyball Program after stepping down as the Head Coach at the end of 2011 in order to become a full time faculty member and complete his Doctoral Degree in Sports Management. Bo and his wife Debra reside in Weatherford with their four children Hunter, Harper, Jaxon and Evan.