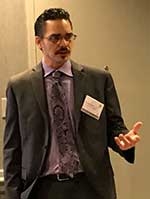 B.A. in Criminal Justice – University of Illinois at Springfield

Mullins, Christopher W., and Daniel R. Kavish (2017). ‘It Just Be Like That’: Young Men’s and Women’s Narratives of Negative Sexual Behavior. Journal of Qualitative Criminal Justice and Criminology, 5(2), 174-194.

Dr. Kavish is an active member of the American Society of Criminology (ASC). He most recently served as a member of the Critical Criminologist of the Year Award Committee. He is currently serving on the program committee for ASC’s 2019 conference that will be hosted in San Francisco, CA.

Dr. Kavish serves on the editorial board for the official peer-reviewed journal of the American Society of Criminology’s Division on Critical Criminology and Social Justice, Critical Criminology. He has also served as a peer-reviewer for other scholarly journals such as the Journal of Criminal Justice, International Journal of Offender Therapy and Comparative Criminology, Social Sciences, and Societies. Likewise, he has evaluated and reviewed textbooks for Oxford University Press and Sage Publications. He is currently the guest editor of a special issue of Societies on identity, stigma, and social reactions.