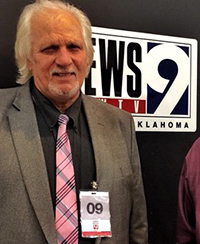 Department of Sociology and Anthropology. Masters Thesis Masculinity and Juvenile Crime, A Study of Disciplines and Masculinity Scores (Application of the California Psychological Inventory Fe Scale) at the Gainesville State School for Delinquent Youth (Sex Roles, Child rearing and Deviance.)

Undergraduate Major Psychology, Preclinical Program, with an emphasis on Behavior Modification Techniques (studied under the late Donald Whaley, one of the nation’s leading behaviorists). Worked with autistic children for three years in The Center for Behavioral Studies.

When I work with undergraduates I am mindful of the demographic information provided to us by the provosts office.

A large number of our students come form western Oklahoma’s small farming and ranching towns. They are part of our great Oklahoma Frontier Tradition. My wife is a rancher and former rodeo professional and through her and the time I spend in small town America I have gained insights into that culture and try to honor it and assist those students as they integrate into our academic community.

Many of our current students are employed so I try to be understanding.  I worked my way through college doing a number of odd jobs until I was offered a job with a rock band and so I played my way through school. This was not as easy as it sounds since I worked six nights a week and drove all over Texas for performances. Many times I returned so late I stayed awake all night and attended 8 o’clock classes the next day. I found that if I asked questions it kept me awake and so I sat in the front and questioned everything. This kept me awake impressed my professors and I became an honor roll student.

My grandparents were western European immigrants and as with most immigrant groups it took a generation to understand the American system. My siblings and myself were the first in the family to attend college. Many of our students are first generation college students too so I try to be patient with them as they adjust to what can be an overwhelming experience.

My Teaching Philosophy has evolved from my own search for answers about society, how it works and how it affects us all. I am a third generation European immigrant raised in an impoverished inner city community on the East Coast of the United States. Because of this experience I have lived through many of the social problems we will study firsthand. As a boy I received a scholarship to an academically advanced college preparatory school, which began a long transformation through culture, and social class that continues to this day. I hope students see the sociological forces in their everyday lives as they become more aware and empowered and become active participants in the social worlds in which they live. The study of sociology can be an exercise in self-realization essential to the development of understanding. According to the sociologist Alvin Gouldner sociologists remain value-free to assure the autonomy of sociology. We examine basic social issues and problems objectively and do not simply react journalistically to passing events. I accept as fact that sociology is a well-defined discipline and not simply a set of social issues that change over time. This allows us freedom to pursue questions of great interest to the socially conservative and to the rebellious as well. We can address the concerns of both using widely accepted and formalized sociological methods and theories.

Constructing a teaching philosophy based on attitudes, values, and beliefs about teaching and learning can be a somewhat contradictory task then for a sociologist. Formally trained to focus on observation and research we are charged to remain dedicated to keeping our own attitudes, values and beliefs out of the mix when conducting research, making observations and lecturing about sociology. But, we do have values and beliefs and we will discuss them with anyone all the while falling back upon our sociological training to measure our own thoughts and actions.

The prevailing ideas in modern societies require an understanding of social context and its effects on thoughts and actions. Particularly Peter L. Berger applied the idea that conceptual thought, language, and logic can be influenced by the sociological milieu out of which they arise to everyday life in the 1960s.

I was the university host to the Peter Berger for three days in 1995. Peter taught that 'Society is an objective reality and also a subjective reality'. His analysis of society as subjective reality describes the process by which an individual's conception of reality is produced by his or her interaction with social structures. Berger and others add to this understanding the element in sociological thinking that compels us to see the particular in the general and the general in the particular and to view both with a sense of skepticism. Developing this skepticism through sociology develops critical thinking. Some call sociological thinking the “sociological imagination”. When we attend a social gathering we do not simply see people enjoying the evening. We see demographic variables of education, race and gender. We may also see variations of social class and the way these things are manifested. We are also careful to see the qualitative aspects of the social interactions taking place and the social context. If we fail to do that all social interactions seem mechanical and without human dimensions.

What would I tell my younger self if I could? Get a haircut, quit hanging out with those rebellious friends, don’t smart off in class, and don’t leave home at an early age. Don’t go on the road with a rock band. Marry a girl from the neighborhood. Get a safe predictable job and quit wasting time playing the guitar and daydreaming. I would finish by saying ignore everything I just said and follow your passions.

I play five instruments and perform with a local band that has been voted Top Dad Rock Band in Oklahoma. We have also been selected Band of the Year by the Oklahoma Country Music association and Band of the Year in the European Market by New Artist Radio. We occasionally back up or open for national touring acts and generally play large corporate events casinos and festivals and charity events.

I coached youth sports year round for ten years. I am a licenced soccer coach in the state of Oklahoma. I have also attended the US National Soccer Coaching School and I am a member of the US Soccer Coaches Association. Youth teams I coached won indoor and outdoor soccer city championships 14 times, a state silver medal, the Regional Power Aid Gold medal and seven local club championships.

I also coached AAU basketball, including an Oklahoma State championship team ranked seventh in the nation. I coached the Oklahoma Street Basketball Champions in the Banc First Oklahoma Street ball tournament two years in a row. Scores of my former players went on to play in high school and college and a few have played professionally. One was a first round draft choice by the NBA Boston Celtics.