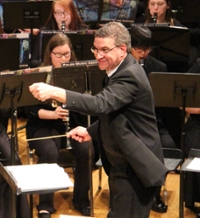 Mr. Marc Mueller assumed his duties as Director of Bands at Southwestern Oklahoma State University in the fall of 2011.  At SWOSU he is the Conductor of the SWOSU Wind Symphony and the Pride of the Great Southwest Marching Band.  In addition, he teaches courses in Instrumental Conducting, Wind Band Literature, Instrumental Music Pedagogy and Instrumental Methods as well as Student Teacher Preparation and Supervision.

Mr. Mueller received a Bachelor of Music degree from South Dakota State University and a Master of Music Education and Conducting from the University of Oklahoma.   Prior to his appointment at Southwestern, he served as Director of Bands at Moore High School for 22 years.  Under his leadership the Moore program consistently earned the highest of honors.  The program competed nationally and was named a Bands of America Grand National Championship Semi Finalist on three different occasions and was an OBA State Championship Finalist for 21 consecutive years.

Mr. Mueller is an enthusiastic advocate of public school music education. He has conducted numerous honor and all region bands and is active nationally as an adjudicator and clinician.  Mr. Mueller also presents and participates at state education conferences and currently serves on the Central Oklahoma Band Directors (CODA) Board of Directors and is the State Faculty Advisor for the Collegiate National Association for Music Education.  (CNAfME)

Mr. Mueller has a passion for the creation of new wind band compositions through numerous commission projects.  He has been involved in world premiere performances of new works and collaborations with composers such as David Maslanka, John Mackey, Jonathan Newman and Scott McAlister.   In 2014, the SWOSU Wind Symphony presented the world premiere of David Maslanka’s “REQUIEM.”

As an arranger, Mr. Mueller has over 200 arrangements to his credit and maintains an active role as a consultant and adjudicator.  He also writes original marching band shows for numerous high school and collegiate bands.