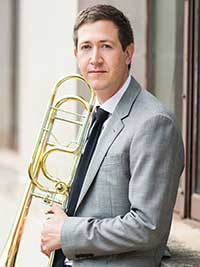 A presenting artist at the 2017 International Trombone Festival at the University of Redlands (Calif.), Martinson presented a lecture, “Sound Development Through Non-Traditional Techniques.” Prior to joining the OKC Philharmonic, Martinson held the position of second trombone with the Ocala Symphony Orchestra (Fla.) for three seasons. Additionally, he was co-principal trombone of the Taneycomo Festival Orchestra in Branson, Miss., and has performed with professional ensembles in Ohio, Indiana and Florida including the Canton Symphony Orchestra, the Columbus Indiana Philharmonic and the Charlotte Symphony Orchestra (Fla.), among others.

Recognition in the International Trombone Association Robert Marsteller, Gilberto Gagliardi/Weril and Larry Wiehe competitions, as well as competing as a finalist in the 2016 American Trombone Workshop National Solo Competition, further speak to his proficiency as a trombonist. He holds degrees from Indiana University, the University of Oklahoma and the University of Akron. His primary teachers include Dr. Irvin Wagner, Peter Ellefson, Stephen Fissel, Ed Zadrozny and Dr. Jim Robertson. He is a native of Huntley, Mont.