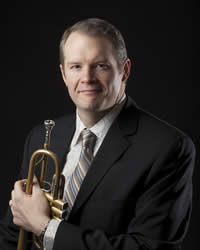 Assistant Professor of Music Dr. Richard Tirk grew up in rural Illinois in a musical family.  He completed a Music Education degree at the Lawrence Conservatory of Music in Appleton, Wisconsin in 1996 and spent one year as an intern in the Appleton School District as part of the Wisconsin Improvement Program.  His desire to pursue a degree in trumpet led him to Kalamazoo, Michigan where he was a trumpet graduate assistant at Western Michigan University and completed a Masters degree in Trumpet Performance.  While in Kalamazoo, Dr. Tirk continued his work in music education as the director of bands at the Gagie School.  In 1999, Richard began his doctoral studies with Richard Illman at Michigan State University serving as the graduate teaching assistant and performing with the Beaumont Brass Quintet.

As a soloist, Dr. Tirk has performed across the U.S. and on five different continents.  Some notable performances include recitals in Scotland, England, Haiti, Brazil, at the 2010 International Trumpet Guild Conference in Sydney, Australia, and Bach’s Brandenburg Concerto No. 2 with the Midland Symphony Orchestra.  Dr. Tirk is a staunch advocate for new music having commissioned several works for trumpet and has been involved with the premieres of dozens of works either as a performer or conductor.  A dedicated clinician, Dr. Tirk has presented masterclasses at several universities and institutions in the U.S. and internationally including the Royal Scottish Academy of Music and Drama in Glasgow, Scotland and Ecole de Musique Ste. Trinite in Port-au-Prince, Haiti.  Before SWOSU, Dr. Tirk was on faculty at Luther College, Bethel College, Independence Community College, and the University of Michigan-Flint.

At Southwestern Oklahoma State University, Dr. Tirk teaches trumpet, assists with the band program, and is the director of Jazz Ensemble A, Jazz Ensemble B and Coordinator of Graduate Studies.