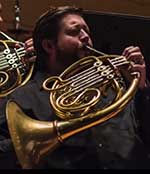 Dr. Robert Fant is a teacher, musician, and composer who brings a world perspective to his work. He is currently Professor of Horn at SWOSU, in Weatherford, OK.

He has regularly maintained a studio of private students during his performance career and strives to inspire students to reach their goals.

His current passion is to pass his musical experiences from across the world on to SWOSU students.