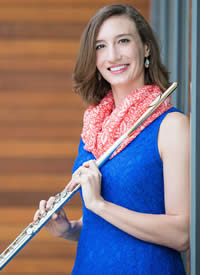 An active performer, Shelley Martinson has appeared as a soloist, orchestral and chamber musician throughout the United States. Martinson joined the faculty of Southwestern Oklahoma State University as Assistant Professor of Music in fall 2013, where she instructs courses in applied flute, flute studio, music history, and chamber music. A passionate educator, Martinson previously served on the faculty of the Skidmore Summer Flute Institute and the Florida State University Summer Music Program. She acted as Visiting Instructor of Flute and Chamber Music at Skidmore College prior to her appointment at SWOSU. Martinson serves on the board of the Oklahoma Flute Society (President) and is chair of the National Flute Association's Career and Artistic Development Committee.

An advocate of both music of the past and present, Martinson has premiered more than a dozen new works featuring the flute and also studies and performs on Baroque flute. Martinson is founder and president of the Flute New Music Consortium (FNMC), an award winning commissioning organization dedicated to expanding and enhancing the modern flute repertoire.  Recent recognitions include grants from the Illinois Music Entrepreneurship Competition, the NFA Arts Venture Competition, and the Oklahoma Arts Council.