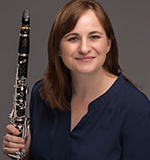 Stacey DiPaolo joined the faculty at Southwestern Oklahoma State University as Assistant Professor of Clarinet in 2010. She previously performed and taught in the New York and Pennsylvania areas, and served on the faculties of Penn State University-Berks campus and Oklahoma City University, and performed as Principal Clarinet of the Oklahoma City Philharmonic during the 2009-2010 season. Dr. DiPaolo has played the concert stages of Carnegie Hall, Alice Tully Hall, the Metropolitan Opera House, New York’s City Center, and the New York State Theater. She has also played under the baton of acclaimed conductors Gerard Schwarz, Skitch Henderson, Robert Shaw, and Constantine Kitsopoulos, and renowned wind band conductors Donald Hunsberger, H. Robert Reynolds, Harry Begian, and Frederick Fennell.

Since 2010, she has appeared regularly with the Tulsa Symphony, Ballet, and Opera orchestras, and as Principal Clarinet of the Lawton (OK) Philharmonic.  Her other orchestral performances include productions such as Garrison Keillor’s radio show A Prairie Home Companion, and Casey at the Bat, a production of Robert Kapilow’s famed “What Makes it Great?” series. She has performed on Broadway as well, and was guest principal clarinet in The Sound of Music, and Baz Luhrmann’s production of La Boheme.

Dr. DiPaolo has frequently been featured as soloist and chamber musician and has given recitals throughout the country.  She currently performs and organizes a chamber music concert series in Weatherford, OK that features the faculty of Southwestern Oklahoma State University.  In her chamber music performances, she has collaborated with such artists as Gilbert Kalish, Stephen Taylor, William Purvis, and members of the Princeton Symphony Orchestra and Oklahoma City Philharmonic.

DiPaolo has spent summers at the Chautauqua Institution, Heidelberg Schlossfestspiele (Germany), and toured Japan twice with the Eastman Wind Ensemble. An enthusiastic and devoted teacher, Dr. DiPaolo is a summer faculty member of the Blue Lake Fine Arts Camp in Michigan in addition to her studio at SWOSU. She frequently appears as guest recitalist and master class clinician at colleges and universities. Recent invitations include the University of Virginia, SUNY Potsdam’s Crane School of Music, Alvernia University, the University of Southern Mississippi, and Kutztown University. In addition to performing, students and colleagues have noted her engaging lectures on music history.

Stacey DiPaolo holds a doctorate degree from SUNY Stony Brook, and received Bachelor’s and Master’s degrees from the Eastman School of Music, including the esteemed Performer’s Certificate. Additionally, she is a graduate-with-distinction of the Interlochen Arts Academy. She has studied with Dan Gilbert, Jon Manasse, Deborah Chodacki, and Eli Eban.