Southwestern Oklahoma State University has featured beauty contests, pageants and competitions since 1919 on the Weatherford campus. Even though the name of the event might change over the years, SWOSU continues its affliation with the presitgous Miss America and is active in the Miss Oklahoma and Miss Oklahoma Teen competitions. In addition to the competitions, Miss SWOSU also has a a mentoring program called the Miss SWOSU Little Stars. 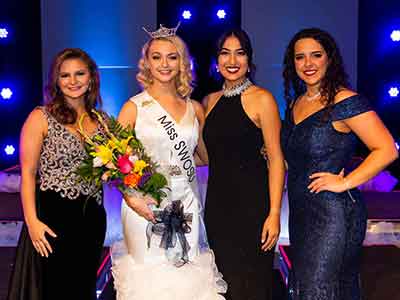 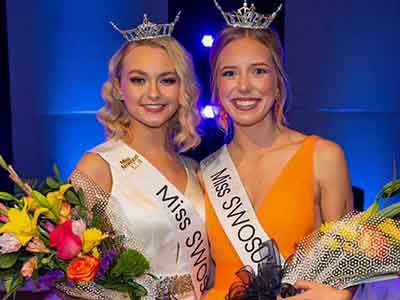 In 1919, a senior girl was selected and named simply, “Beauty Queen.”

From 1920 through 1929, a May Queen and her Robin Hood, who were dressed in theme, were selected and they were joined by a “Garden of the Girls.”

No history was made available in the 1930s.

In 1954, the campus beauty won the title of Yearbook Queen.

It wasn’t until 1958 that the pageant and title took on a more familiar look and became known as “Miss Southwestern.”

During the 2000 year, the Miss America Scholarship Program started the Miss America 2.0 and several things changed, such as contestants being called candidates; pageants were called competitions; girls are now ladies; and the lifestyle in fitness in swimsuits was dropped from the competition.

In 2009, the Miss SWOSU’s Outstanding Teen Competition began as a mentoring tool for statewide teens to see the SWOSU campus and experience the hospitality “on the hill.” One titleholder in 2011 was the “FIRST” in Oklahoma to win the Miss America’s Outstanding Teen title!

The miss and teen candidates are given the opportunity to compete at the Miss Oklahoma Competition and Miss Oklahoma’s Outstanding Teen Competition that is held every year at Paradise Cove at the RiverSpirit Resort and Casino in Tulsa.

In 2020, a national pandemic shut down cities, schools and lifestyles around the world and because of the COVID virus,  a two-year shut down of all local competitions took place.

In 2023, SWOSU will crown it’s 65th Miss SWOSU titleholder and its 14th Miss SWOSU’s Outstanding Teen. The local competition is one of the only ones in the state with live jazz music provided by the SWOSU Music Department. The competition is held in the Fine Arts Center Auditorium.